Students currently enrolled in different institutions of Geelong were invited to the Aussie Communication Bootcamp held at Beav’s Bar. Keeping in mind that the international students have had a steep transition and would have had a culture shock coming to Australia, various activities were designed to help them acclimatize to Australian language and culture.

Scheduled on a Wednesday evening, this event was perfect for the newbies to network, relax and learn new things about Australia. The event started with  a warm welcome and overview of the activities to take place.

A short video showing Aussie slang was shown followed by a fun quiz where the participants had to guess what words like bikkies and choc-a-bloc meant. Following that, there was a session explaining the difference between formal and informal communication. (view the video here)

Whilst phrases like ‘it’s raining cats and dogs’ or ‘in a nutshell', sound fine in casual conversation, they are not as suitable in a formal setting. The students each received a card with a sentence or phrase written on it. Some were written using formal language and others informal. The students had to find their partners who had the matching card. For example one student had the phrase “Yeah, shoot me an email’. The partner had “Please send me an email”. Next a video was shown where 3 scenarios were acted out, each using both formal and informal communication. The students had to decide which version was formal, which was informal and which was the correct approach for that particular scenario. They then had the opportunity to undertake role plays in small groups.

As most of the students were from tertiary level, they found this session worthwhile as they could use it during lecturer meetings, job interviews and networking. 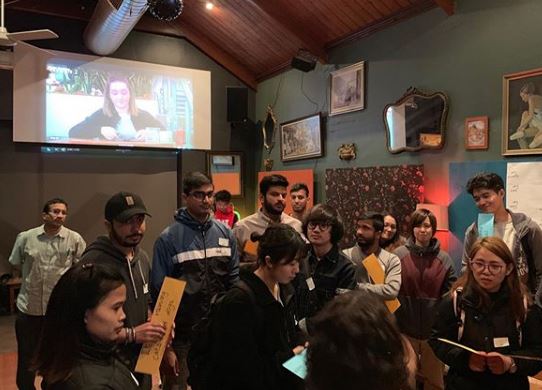 As everyone had a growling tummy by then, it was time for freshly baked pizzas. While everyone grabbed their pizzas, mingled around and had a chat, the ambassadors set up a feedback activity.

The responses received received from all the guests who had attended the event were very positive.